BLOCKING THE SPREAD OF ALL TYPES OF ATTACKS

BLOCKING THE SPREAD OF ALL TYPES OF ATTACKS

WE DON’T MISS ANY NEW ATTACK​

BLOCK out of the infected computer of any software that has been defined as malicious. The problem: the attackers who took over the computer will remove the cyber protection, and the software will exit.

Instead of trying to PREVENT, we ALLOW Malware to go out of the infected computer.

Because this malware is not blocked when it goes out, it will be blocked on the receiving computers. So, we continue protecting the organization even if Cyber 2.0 is removed from the infected computer.

ALL ADVANCED ATTACKS AGAINST CYBER 2.0 WILL FAIL 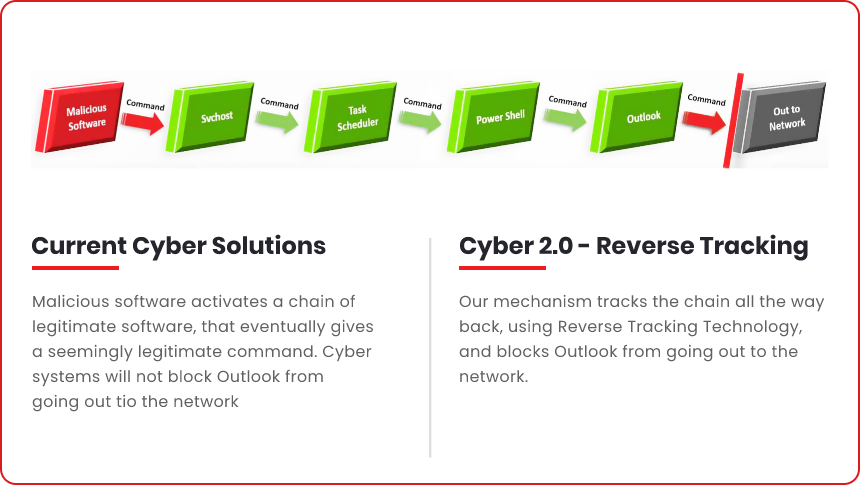 Not approved software will still go out with the original port

All software will go out with the original port

The system will allocate incorrect ports

is based on
biological models
that are vulnerable to attacks

is based on
mathematical chaos model
that cannot be breached

AN AGENT WILL BE INSTALLED AT ANY ENDPOINT, CONNECTED TO A CLOUD SERVICE OR AN INTERNAL SERVER

STARTING WITH MONITOR MODE, AND LATER MOVING TO DEFENSE MODE

CYBER 2.0 INTERFACES WITH YOUR SYSTEMS, WITHOUT THE NEED FOR ANY ADDITIONS OR MODIFICATIONS

Creating multiple Plans without the use of hardware

Reverse Chaos for employees who work at home 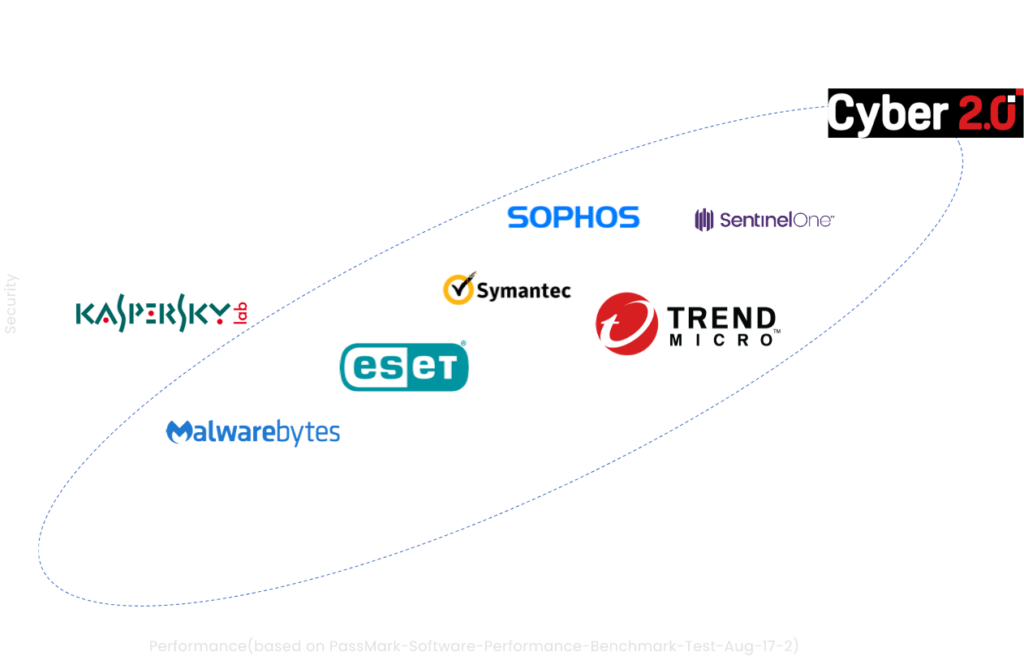 THE PERFORMANCE IS BASED ON:

What kind of cyber security does Cyber 2.0 supply?

Cyber 2.0 is a new, revolutionary and game-changing system unlike any other. This is an innovative EDR system that combines Zero-Trust and Network-Obscurement solutions, and a breakthrough technology based on the Mathematical Chaos model.

Does Cyber ​​2.0 replace EDR (Endpoint Detect & Response systems)?
Definitely yes. The system monitors all the active software and all the active processes in the monitored computers. The information accumulated by the system allows it to create an active inventory of all the active software and processes that exist in the monitored devices. The system displays each software and each version of software according to the computer on which they are installed. It also monitors all incoming and outgoing traffic from the protected components, with the information being stored in the form of flow instead of in the form of individual packets – allowing for efficient and fast reading of the information. The system studies the retinal behavior of the various components in the network. Every action that is taken, creates repetition and constant behavior which is maintained. When a software component or user does an action they have not done before – this creates an alert. The system allows searching in different sections according to all the parameters collected in the monitoring – both network and process. It knows how to keep track of pre-defined software and give individual alerts. When monitored software changes (anomalies), it will immediately send an email alert about the nature of the change.
Does Cyber 2.0 replace NAC systems?

Definitely yes. Once the system is deployed in protection mode, only authorized devices will be able communicate with each other. Any attempt to contact using unauthorized or unknown devices will encounter a wall of chaos.

What about employees WFH (working from home)? How does the system protect them?

Definitely yes. When system agents are installed on home employees’ computers, they prevent malware from leaking into the corporate network. Other systems deal mainly with permissions – that is, which of the employees is allowed to call the organization from home. But if the computer at home of a licensed employee has been attacked, the permissions system will not prevent the attack from leaking into the organization. The Cyber 2.0 system, however, will prevent the spread of such an attack.

Does Cyber 2.0 use zero trust?

Cyber 2.0 system implements the principle of Zero-Trust, which is uniquely implemented to allow for easy control of the information that passes through the corporate network.

What about risk management?

The system generates the first risk report within 14 days, after which the system issues these reports on demand or on a regular basis.

Does Cyber 2.0 have Forensic Capability?

Absolutely yes. The system stores all network information in the form of flow. This allows tracking of all network traffic generated in the organization in a simple and efficient manner.

What about DDoS and similar attacks?

These attacks are automatically blocked by Cyber 2.0 System.

What about 0-day attacks, which enable attackers to run legitimate software, such as PowerShell, and use it to send commands?

The command will run, but Cyber 2.0 System will block the access of the legitimate software, and will not allow it to go out of the computer or receive new commands. The administrator will receive an immediate alert.

What about advanced IDS and IPS systems?

Cyber 2.0 System renders IDS and IPS systems virtually obsolete. However, the organization may use them to monitor illegitimate traffic (unscrambled by Cyber 2.0) or allow the Cyber 2.0 Gateway system to translate the communications.

How is the Cyber ​​2.0 Detection System different from other systems on the market?

The systems on the market are usually based on learning the organization’s routine, and then alerting Anomaly Detection or trying to block software that has been found to be malicious. The problems in these systems are:

Cyber ​​2.0 software does not perform Detection in this way. The system initially defines and marks only those programs that are allowed to move across the network and make use of network resources (about 100 programs out of thousands of programs that exist in the organization’s computers). For example: Office software is allowed to be used. A screensaver must not move across the network and use network resources. Photoshop software – for a certain organization that has not purchased it, is not allowed to move, but for a second organization it is allowed, and a third organization will want to give permission only to a number of computers to use it. Software that has not been authorized to roam the network – including any new and unfamiliar software, whether malicious or not, (and any new virus) will be blocked by Cyber ​​2.0 . In addition, the reverse threading system allows our system to check every process that is loaded on the computer and verify by MD5 by size and by SHA whether the file is authentic or not, and whether it is approved to move around the network.

How is the Cyber 2.0 Prevention System different from other systems on the market?
What about File-less infections?

The attack will enable the command to run, but Cyber 2.0 System will block the access of the legitimate software, and will not allow it to go out of the computer or receive new commands or instructions. The administrator will receive an immediate alert.

What about virtual machines?

All supported operating systems work on all virtual platforms.

What about network segmentation?

Many White List based systems have failed for the following reasons:

What about internal Firewalls?

The use of Cyber 2.0 renders standard-deployed internal Firewall obsolete. However, Cyber 2.0 System can work with, and even enhance their defenses.

Are the Cyber 2.0 Systems signature-based, algorithm-based or both?

Neither. Cyber 2.0 System is different from any current signature or algorithm-based system. Its internal logic is based on Mathematical Chaos model.

How do I keep the Cyber 2.0 software up to date?

Since Cyber 2.0 is not a signature-based system, there is no need for regular updates. In the case of an agent update, the update is performed either from the cloud server or from the enterprise server.

How does Cyber 2.0 block Man-In-The-Middle attack

In the MITM attack, an attacker intercepts the communication between the two legitimate devices and manipulates the exchanged information. Cyber 2.0 Chaos engine scramble the ports and changes the scrambling tables in both the scrambling source and destination ports between protected computers every second.

Does the system increase the organization's total cost for cyber protection?

On the contrary. The total expense will be reduced because it will be possible to remove all the software that Cyber 2.0 shows are redundant, as some of our customers have already done. For example: IDS, IPS, Internal Firewall, Next Generation Anti-virus, NAC, BOYP, None Human DLP, Password-Acceleration, Honeypot, Send-Box as well as all systems based on behavior detection, anomalies, artificial intelligence and more.

Does deploying VORTEX in OT require a network change?

Certainly not. The VORTEX does not function as a bridge, and does not require any change of settings in the network or the component that it is on. Moreover, the protected component does not “know” that it is protected since the connection to it is completely normal.

What types and sizes of organizations does Cyber 2.0 support?

Our system supports organizations of all types and sizes, no matter how many end points they have.

How will Cyber 2.0 System be deployed in my organization?

The deployment process is designed to be easy and seamless. The client is a simple MSI installer, and can be deployed by any remote deployment system. Download Agent

Do I need to deploy the system across the entire organization at once?

What did you find out during the initial POC’s?

How does the Cyber 2.0 SOC system work?

Cyber 2.0’s SOC consists of senior information security analysts. It is active 24/7, and it allows us to: